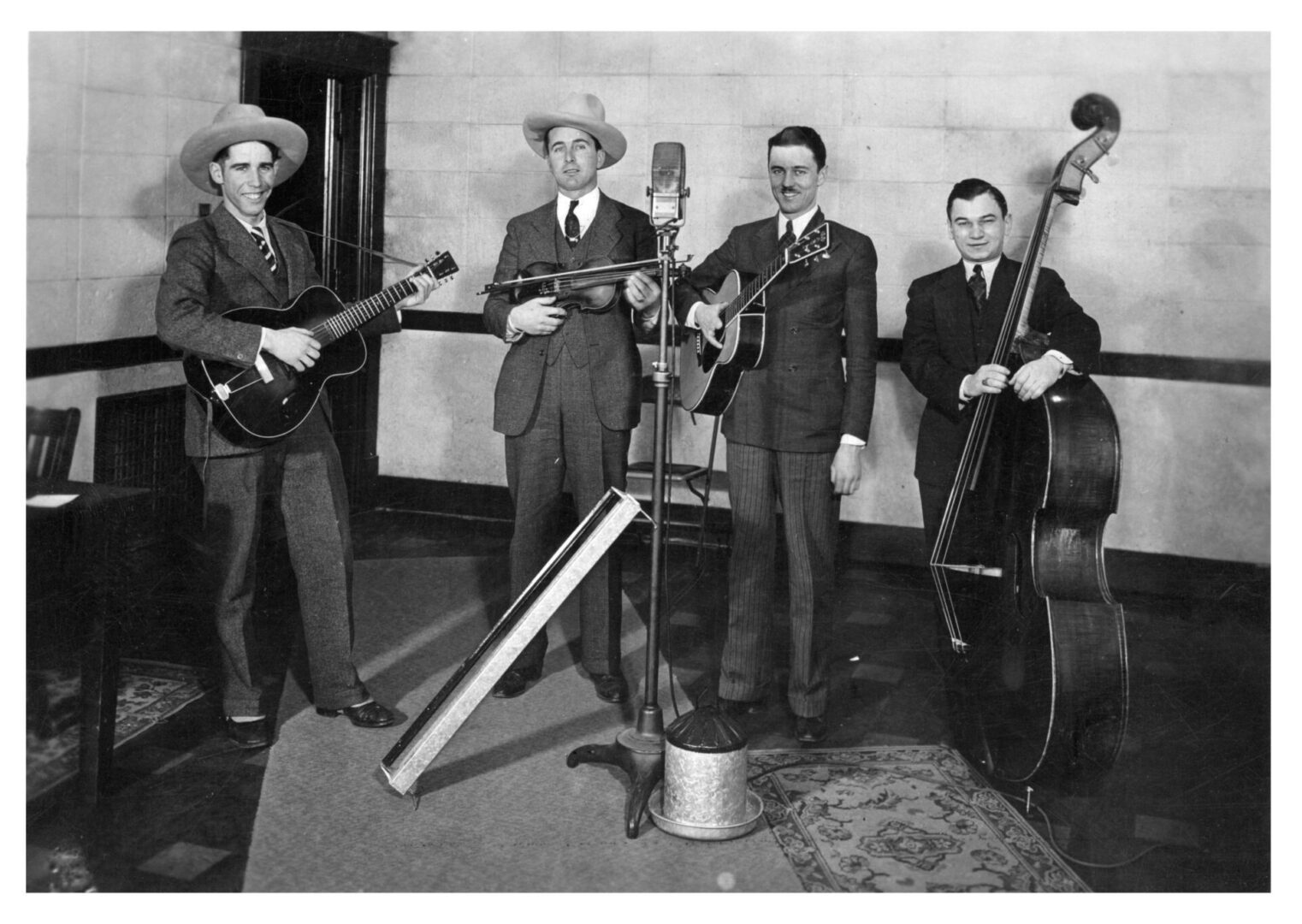 Lonnie Robertson (1908-1981) was able to make a substantial part of his living playing fiddle, mandolin, guitar and songs for radio stations, a rare achievement for a traditional musician from the Ozarks. Many senior fiddlers throughout the region point to him as a primary influence. Fiddle scholar (R.P. Christenson wrote of Robertson, ‘Here was the best Missouri fiddlers I ever heard.” (Christianson 2 p xvi).

Robertson was born in Longrun, Missouri, into a musical family with a fiddle playing father, Jarrett. At first Robertson’s primary instrument was guitar. Guitarists were rare and sought after then; pump organs or fiddle stick were often the only accompaniment (or “second”) for fiddlers of square dances and house parties. He began to focus more on the fiddle at the age of 13, when his father died. 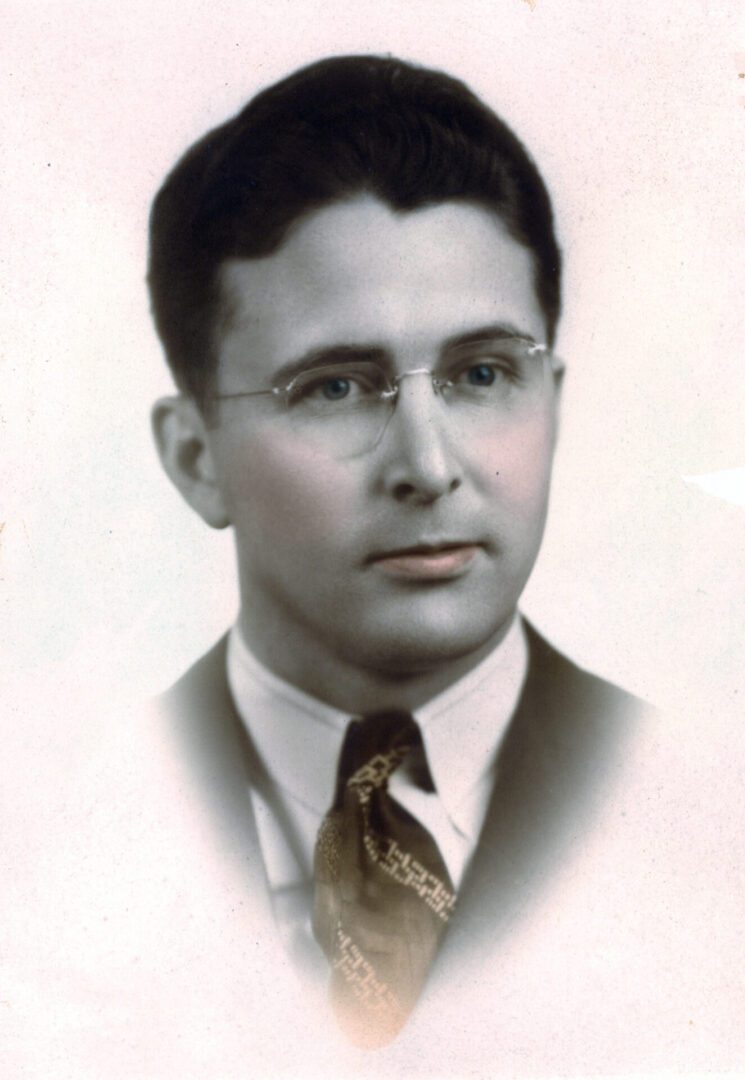 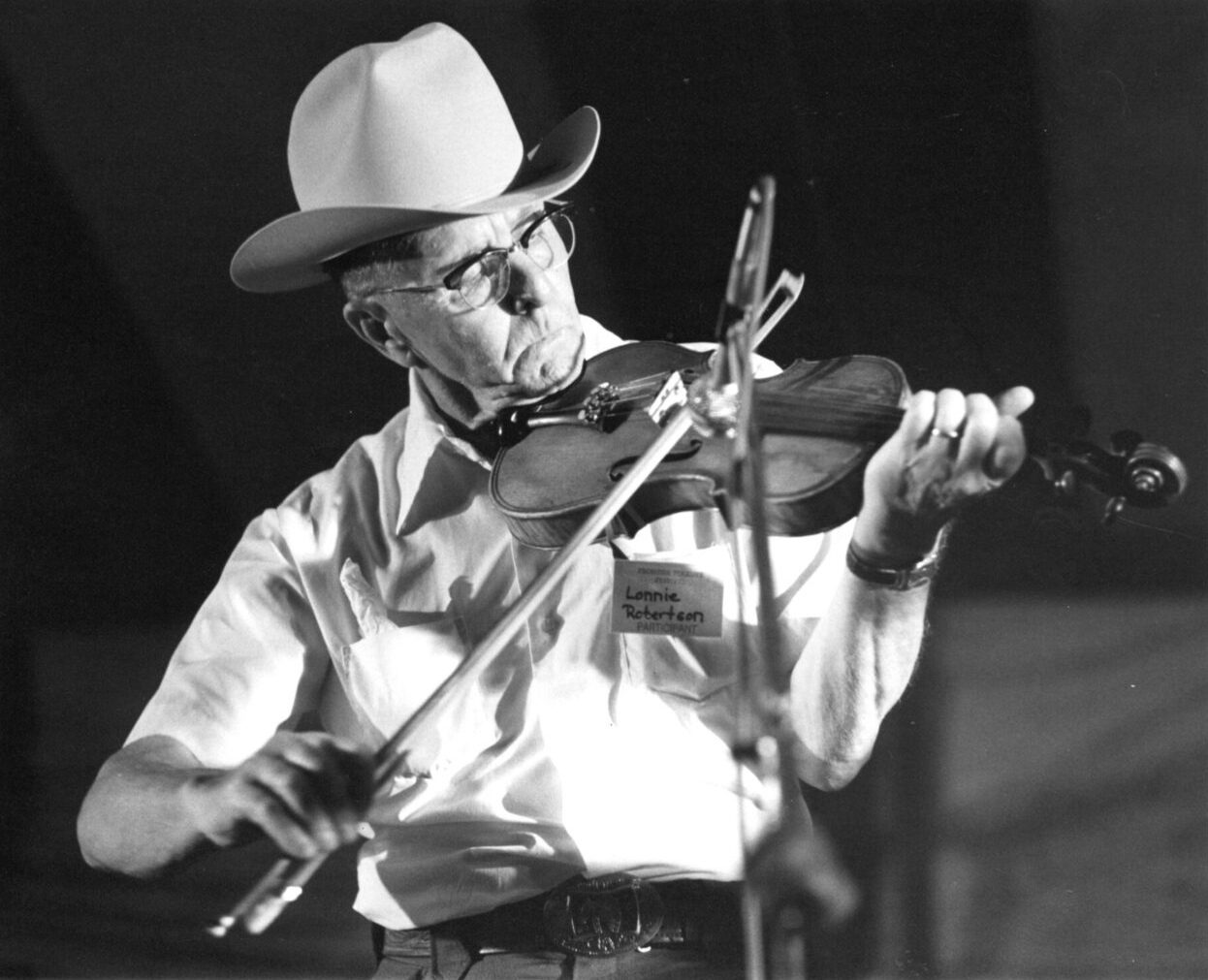 For a period, Robertson only knew how to play in “cross-tuning” or “dischord” tuning as his father often did, and was delighted when a man in a store in Hammond showed him how to tune his fiddle in standard tuning.

When he was 15 he moved to St. Joseph, Missouri, to work in a packing plant and he began to listen to 78 rpm recordings of old-time musicians such as Clark Kessinger and Gid Tanner and the Skillet Lickers. He also began playing with a band on KEQ. 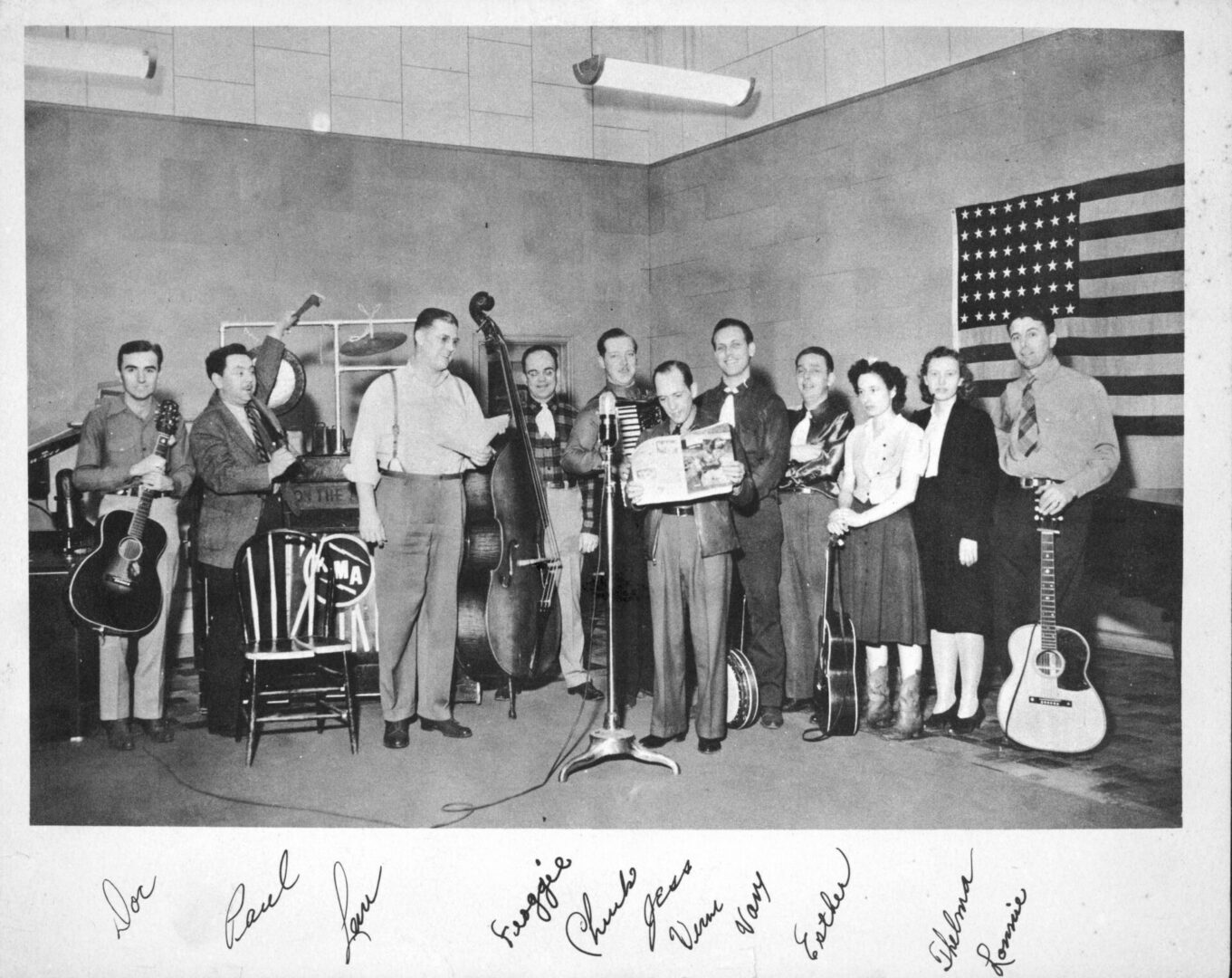 After meeting and marrying a teacher, Thelma Jones, Robertson tried farming but ended up back at the packing plant in St. Joseph. Always on the lookout for musical career opportunities, he landed a job as a fiddler at WNAX radio in Yankton, South Dakota. Seeking more pay, he joined forces with Roy McGeorge, switched to mandolin, and began signing brother-duet-style songs; and doing comedy back at KFEQ. In the years that followed, “Lonnie and Roy” worked at WAAW (Omaha, NE) KFAB (Lincoln, NE), a Dallas company that supplied transcriptions for “border” radio stations, and KOAM (Pittsburg, KA). Robertson began to play fiddle more, and even hosted a daily radio show called “The Fiddle Dusters.” Pay was always low, however, and eventually the duo broke up. 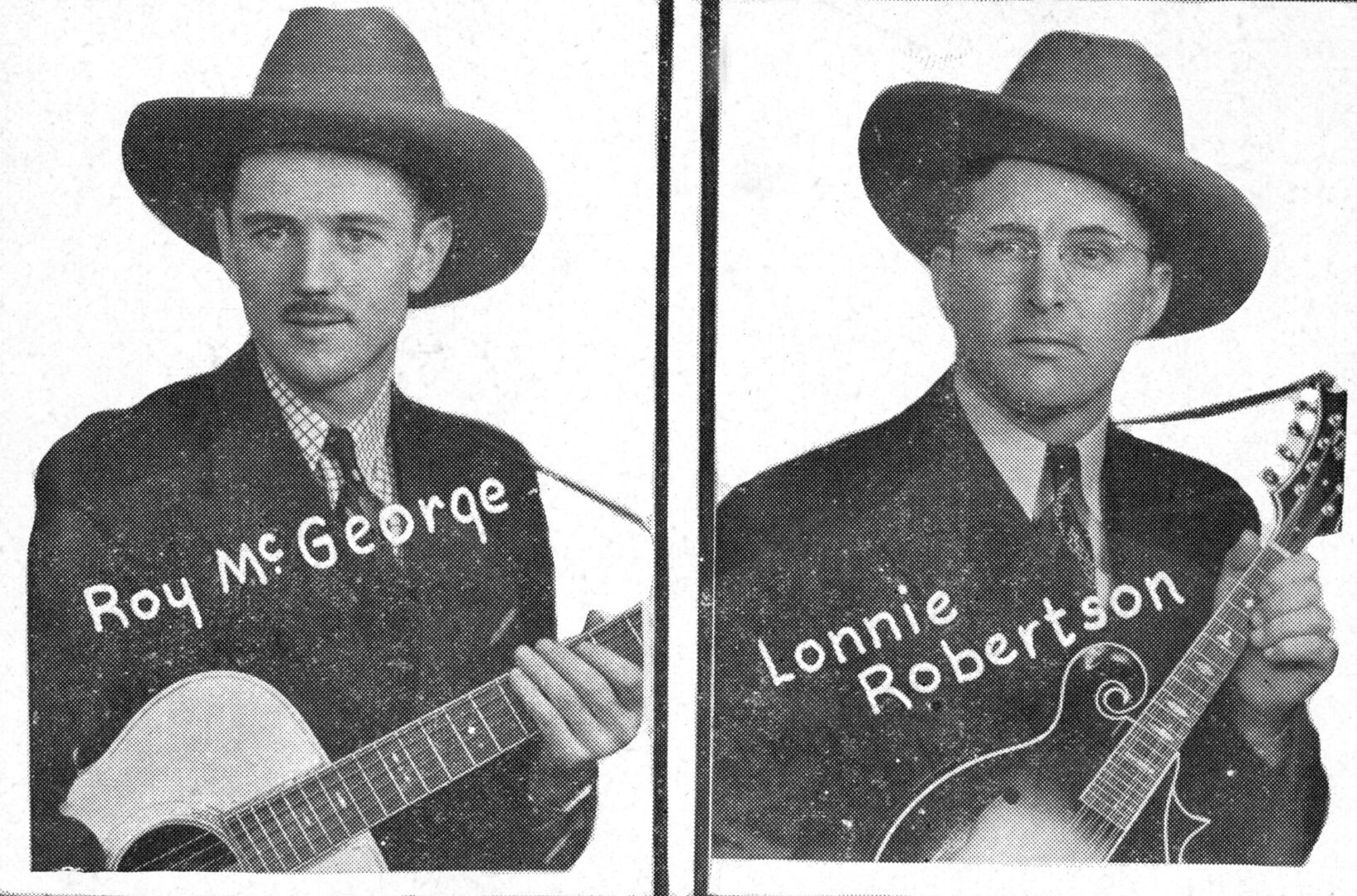 Lonnie played the fiddle throughout his whole life, culminating in performances at the 1980 St Louis Arch Frontier Folklife Festival. 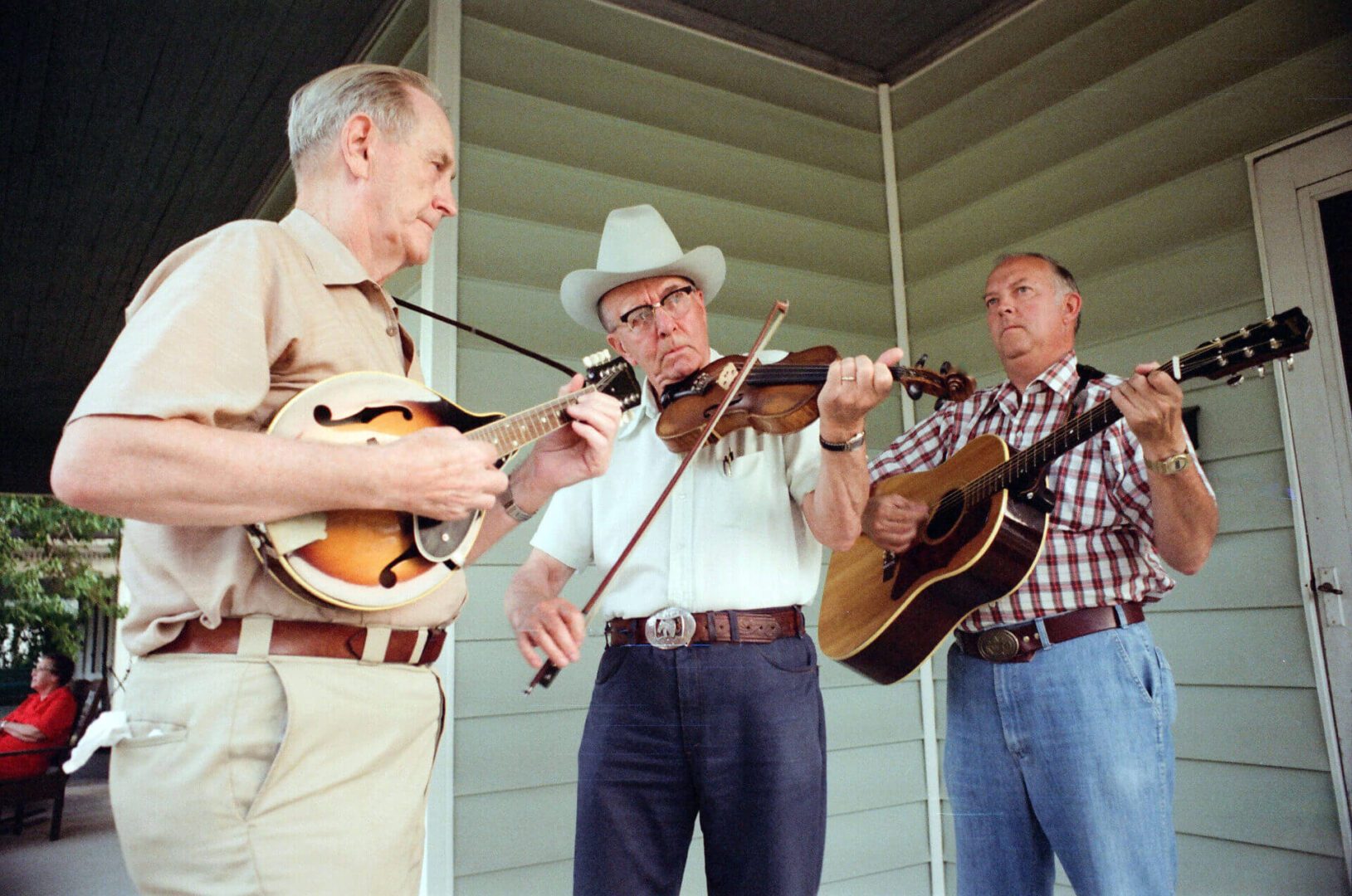 In his later years, Lonnie released a series of “variety” fiddle recordings through the Caney Mountain/Rimrock label.

In 1996, Rounder released a CD (Lonnie’s Breakdown, Rounder CD0375) featuring Robertson playing 34 tunes in the crisp, clean, fast style for which he had become so well known.

(Thanks to Drew Beisswenger and Gordon McCann) 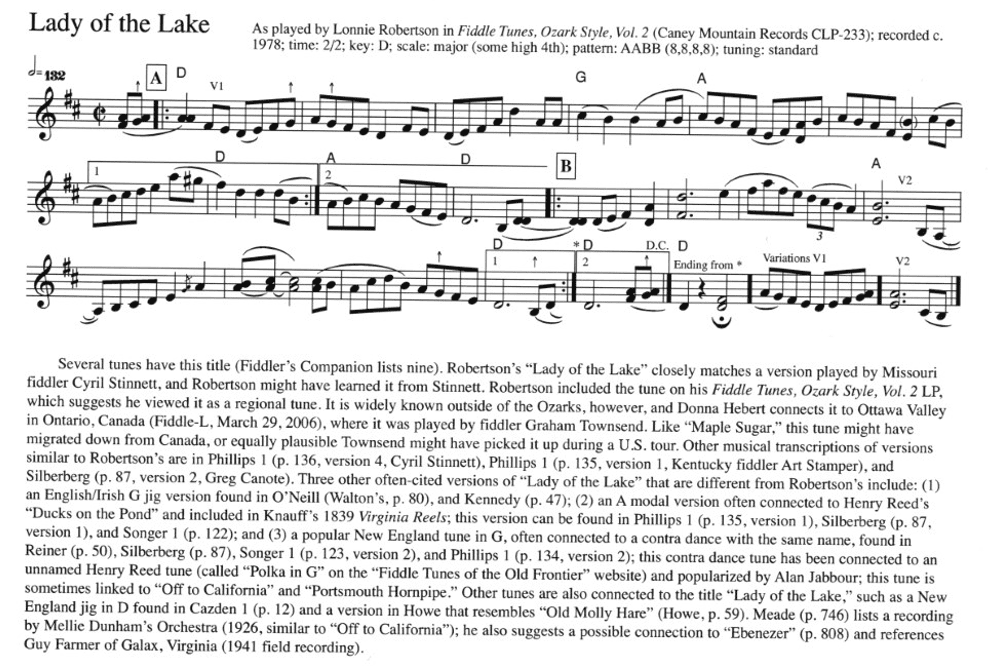 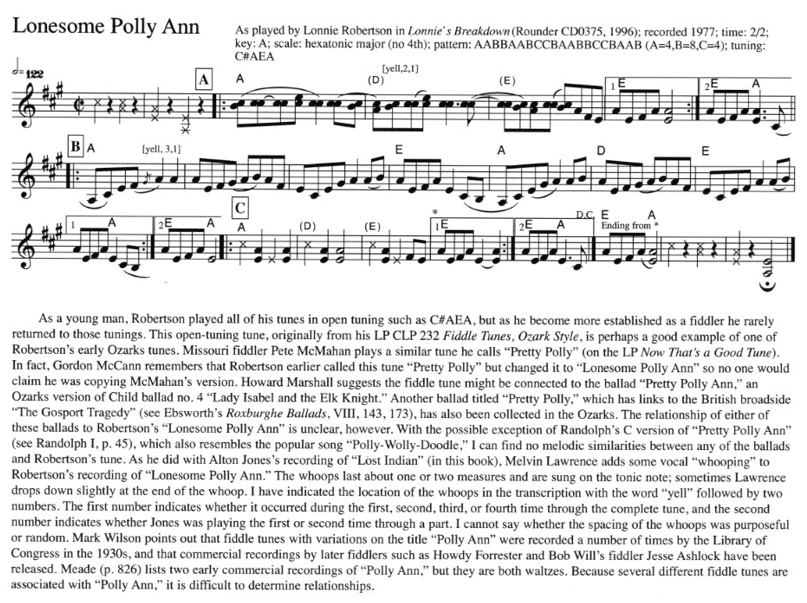 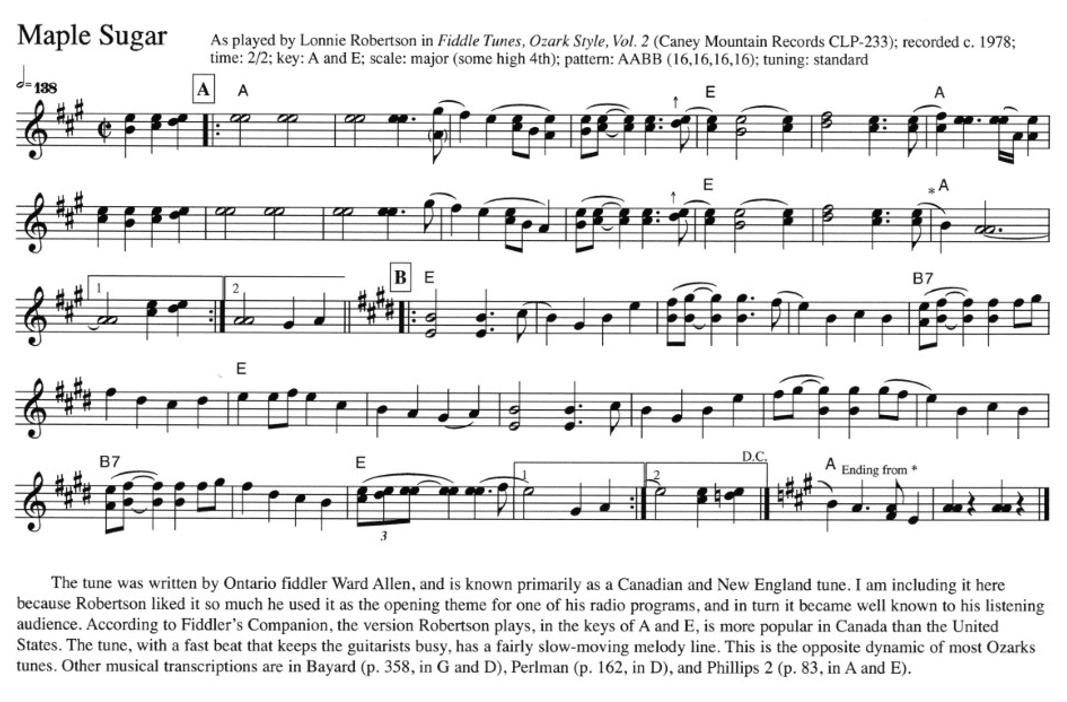 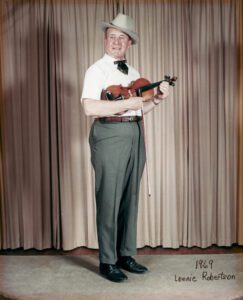 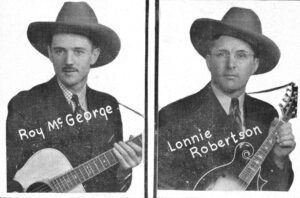 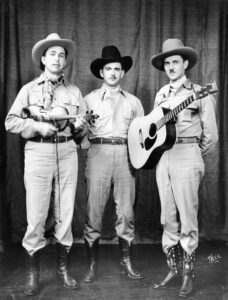 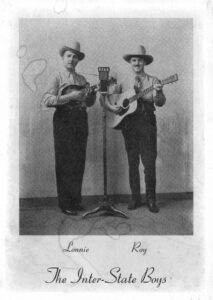 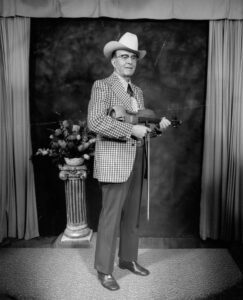 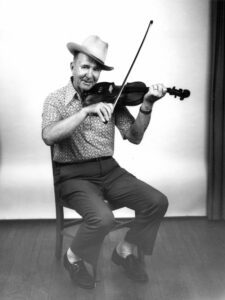 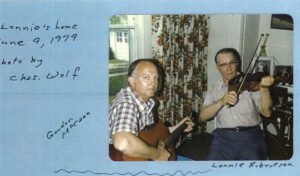 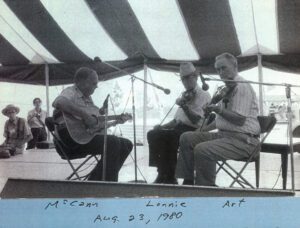